A Poet Laureate for Milton Keynes

This is the text from a Press Release sent out today.


Milton Keynes has joined a growing list of towns, cities and counties in the UK by appointing their own official Poet Laureate. Outgoing Mayor Debbie Brock awarded the title to Mark Niel in recognition of his efforts to promote poetry and local poets through his work with Tongue in Chic as well as representing Milton Keynes at performances across the country. In addition Mark was a key contributor and judge for the Mayor’s recent Royal Wedding Poetry Competition. The Laureateship is an honorary title which will support the Mayor’s ceremonial role at various civic events throughout the year. The announcement was made at the Council’s Annual Meeting on 17 May, 2011 by Debbie Brock. Debbie said,

“Mark is a great ambassador for Milton Keynes and a brilliant poet, he engages with many schools and groups across the city. I look forward to reading about Civic life in the future represented in verse”.

“This is a great honour which took me completely by surprise. I’ve always been proud to represent Milton Keynes and now I can do so officially, that’s a wonderful feeling. I hope to encourage others to read, write and listen to more poetry and continue to find opportunities to showcase the wealth of talent from our town”.

Mark is a home grown talent who only took the stage as a poet for the first time three years ago. Publication in local magazine “Monkey Kettle” encouraged him to take his first nervous open mic at Madcap for the “Poetry Kapow” event. Since then, Mark has done over 200 gigs, and won many “Poetry Slams” including the Camden Crawl as well as Bristol, Wenlock and Ledbury Poetry Festivals. Now establishing himself as a headline act and a poet for people who don’t like poetry, Mark has graduated to headline performer and started to make appearances at leading Festivals. In July, he will make his debut at the prestigious Latitude Festival. Mark was chosen to represent the South East region on the Apples & Snakes “Public Address” Tour last year. 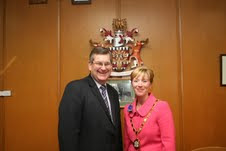